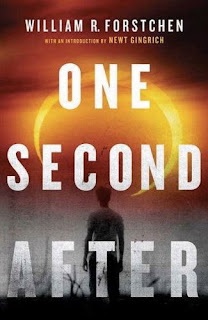 … I just finished it this morning.  One Second After by William Forstchen.
It’s about what happens in the event of an “EMP” which is and Electro Magnetic Pulse.  EMP is what happens when you burst a nuclear bomb 25+ miles up in the atmosphere.  It fries every computer chip and electrical circuit but does not actually “destroy” anything with shrapnel or nuclear fallout.  It just kills everything with any kind of computer circuitry in it.  Fried.  Dead.

The only cars that work are those built prior to 1980 or so, before they started using computers in the engines.


The only phones that work are those that run on copper wires.


The only radios that work are those with vacuum tubes.


Planes fall out of the sky.  People on surgical tables die because all the equipment attached to them stops working.  All the diabetics die because they run out of insulin.  Everyone on Prozac finally, really, truly, does go insane.  Elderly Alzheimer’s patients with monitoring bracelets on wander into the woods never to be seen again.  Antibiotics run out.  Food runs out.  Ammunition runs out.  EVERYTHING runs out because everything we produce relies on computer controlled machinery to produce it or we have it imported.  Everyone is isolated, filthy, dying, and insane.


It’s a real ray of sunshine!


But it’s a worthwhile read if only to warn us what could happen if that lunatic running (Iran, Korea, pick a country) gets this idea into his head… If he hasn’t already…